With the Dublin Mini Maker Faire just around the corner i treated myself to a new toy to hack in its honour, yeah i know, any excuse. Everytime i look at my 1:18 scale delta integrale (a reminder of the one i used to own thats sorely missed!) i always think that it would make a great project to add working lights to it and have them controllable. Then i remember how much the model cost and i decide not to chop it up, not yet anyway. As i was browsing the argos site to look for anything interesting and cheap i came across this Porsche 911 GT3 RS which seemed like a nice buy. 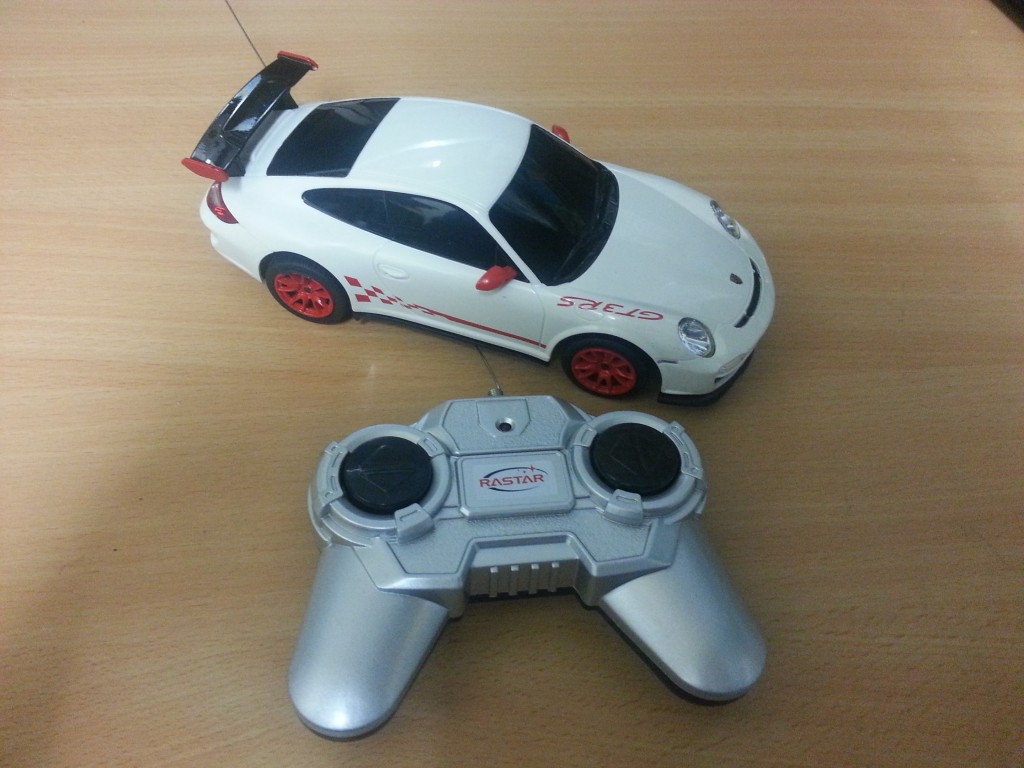 The quality of the car is actually pretty nice so i was quite happy with it, the controller is a bit crappy but that isn’t important. Inside the car the circuit board has no COB (Chip On Board, the black blob you see on cheap mass produced electronic stuff) and its all through hole components, both of which make it a lot easier for hacking! 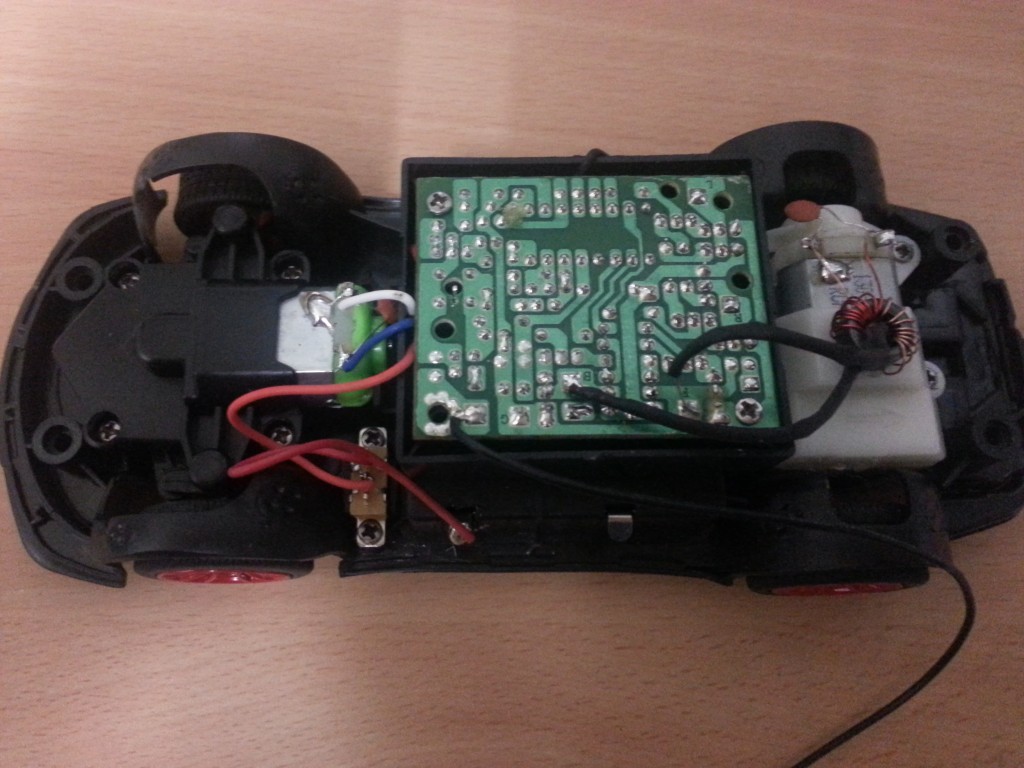 At the front there is a motor to control the steering, either fully on or off. At the back there is one motor driving the wheels, the rear motor has a choke to suppress rf interference, this is needed as you don’t want your controller not working as the motor spins up! 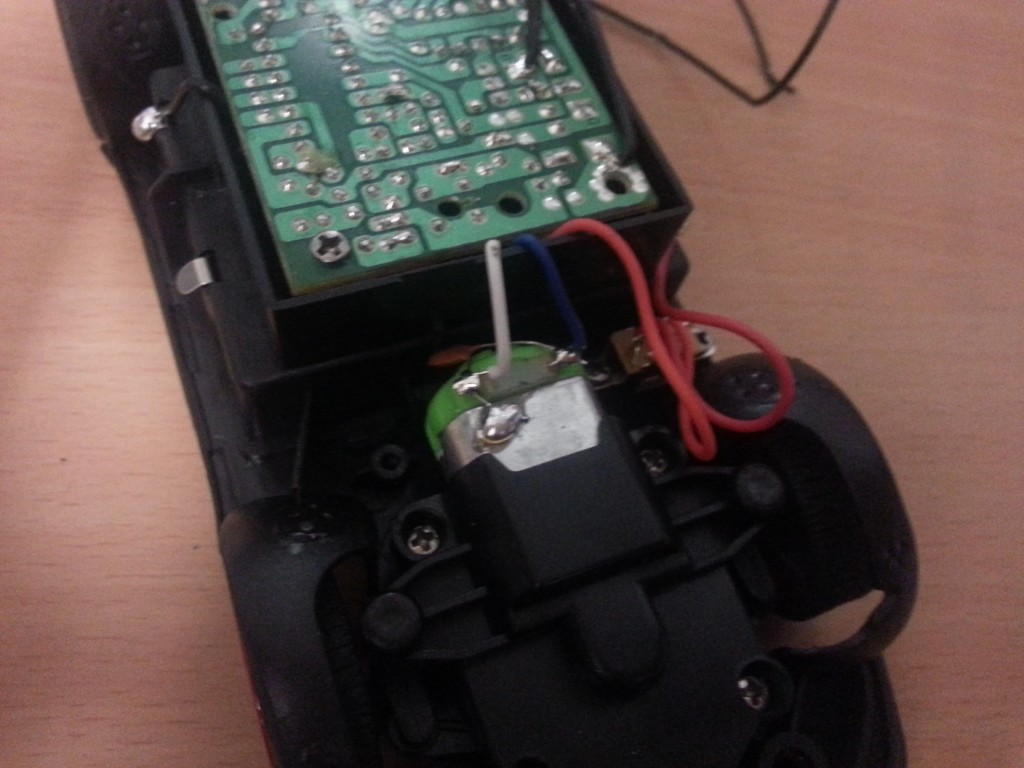 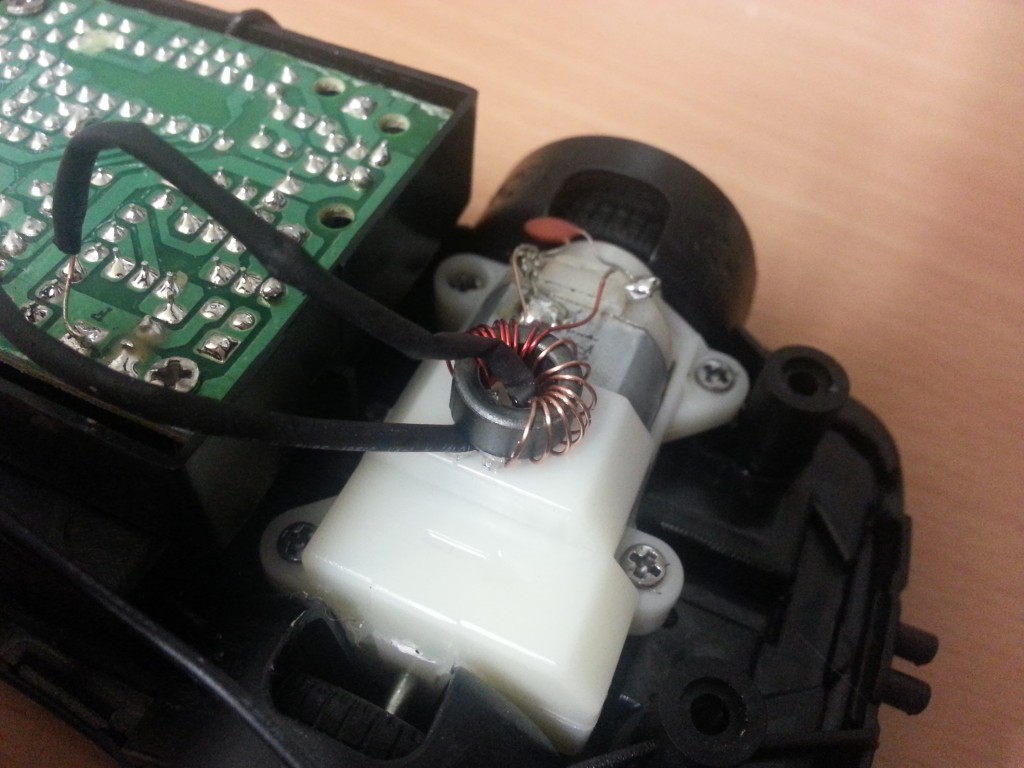 Flipping the board over we have one IC, a RX-2-G which is a reciever chip for this type of application although very little info is available on it from the usual sources. To the left of the chip is the circuity associated with the antenna. The TO-92 package transistors make up two H-bridge circuits, each using six transistors. H-bridges are used in motor control as the allow easy swapping of polarities on the motors so they can go backwards/forwards.

As i had no intention of keeping the controller, i didn’t need the RX-2-G but i did want to use the H-bridges so it was easies to desolder the clip and leave everything else in place. Tracing back the pins to the H-bridges i soldered wires onto the four pins the drive them. To control the motors all that is needed is to apply power to one of the pins for forwards, backwards, left and right. 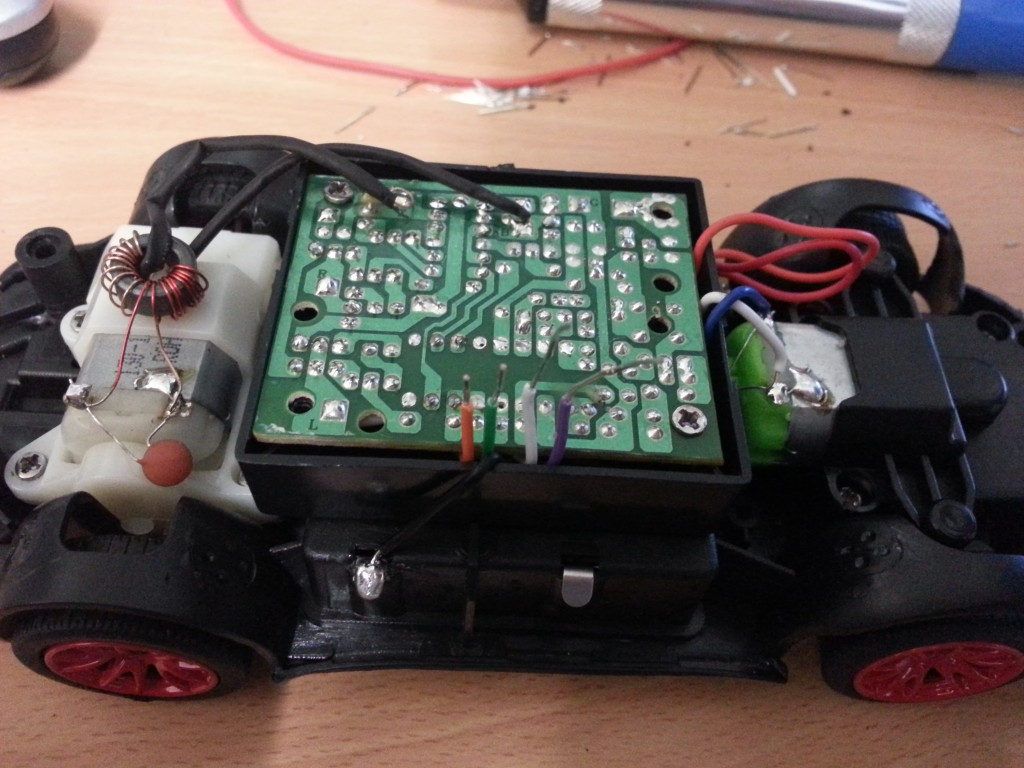 Not forgetting my original dreams of having lights i disassembled the headlights, drilled them out and put some 5mm LEDs in. As space is a bit tight i soldered the resistors in line with LED’s and covered everything in heatshrink. 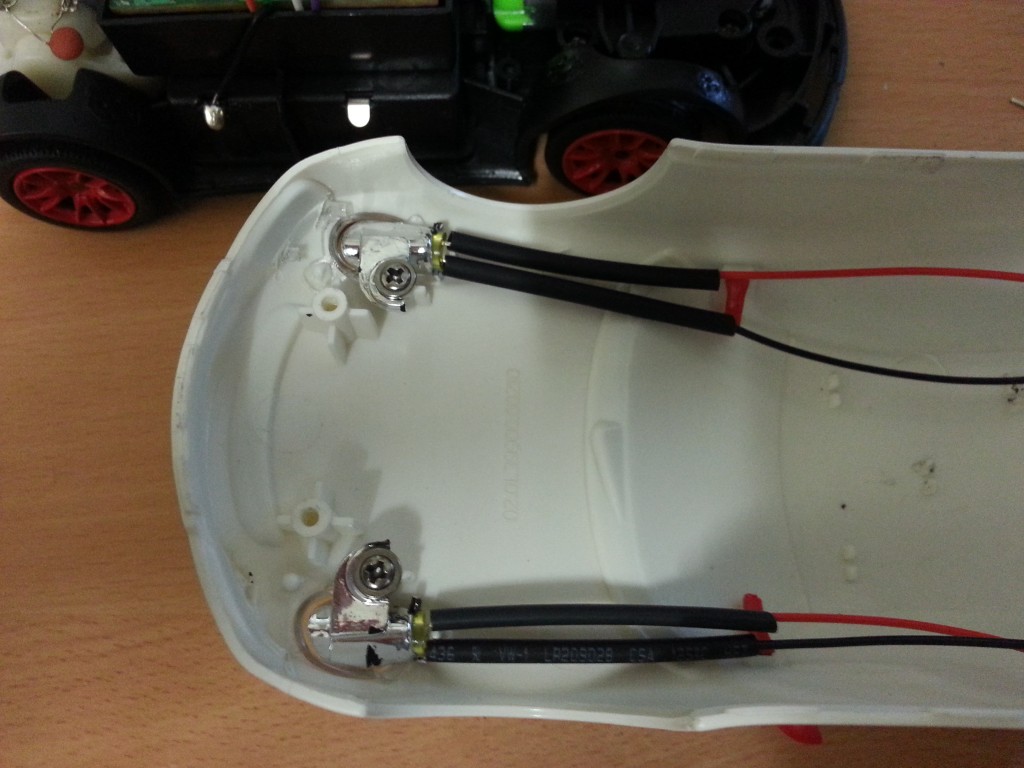 The car takes three AA batteries, giving a total of 4.5 volts. The arduino board i’m putting in is a 5 volt 16MHz nano which can work at 4.5 volts just fine. As mentioned space is tight so i had to remove all the presoldered headers from the arduino and the bluetooth module, fun! Excluding power and ground, six arduino pins are used, four for motor control, one for the lights and one for serial comms with the bluetooth module (we’re only receiving data, not sending too) Here it is with both boards in place. 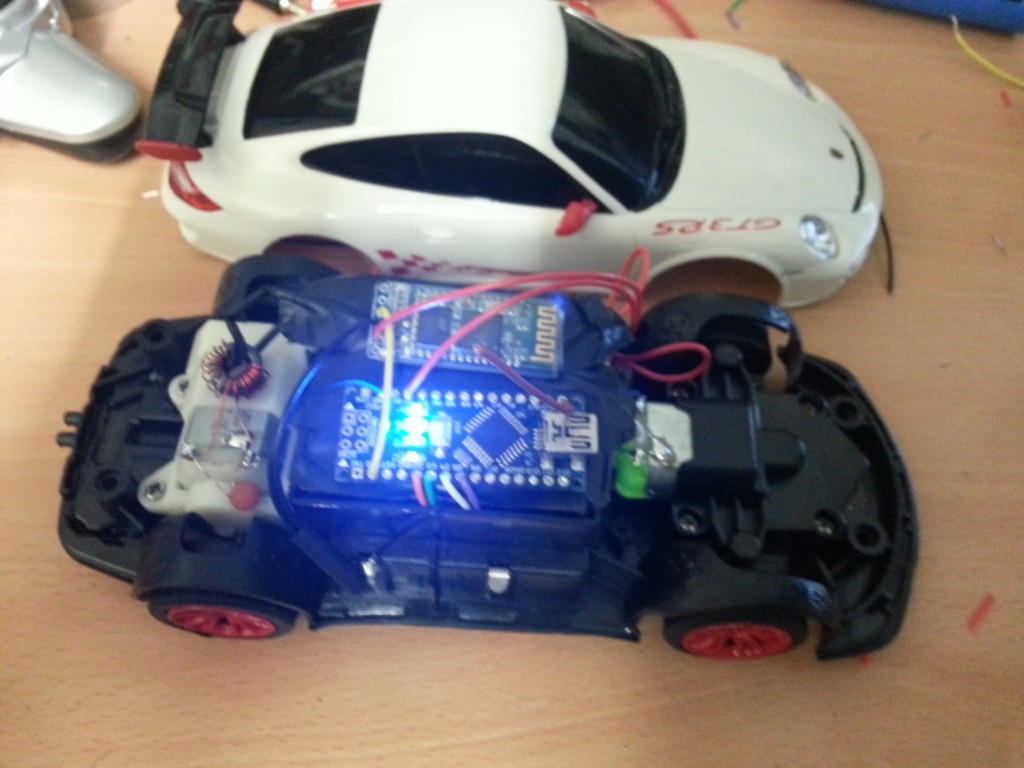 After getting the arduino coded and phone app done (these will be covered in another post) the first test proved unsuccessful. When trying to steer the wheels or move the bluetooth module was turning off. It turned out that the inrush current of the motor was causing the voltage to drop lower than the module could take, but just for a split second. To combat this i soldered a 1000uF cap (the biggest i have) across the batteries to try smooth out the voltage and it worked, the module isn’t resetting now. I found a nice little home for it beside the front motor. 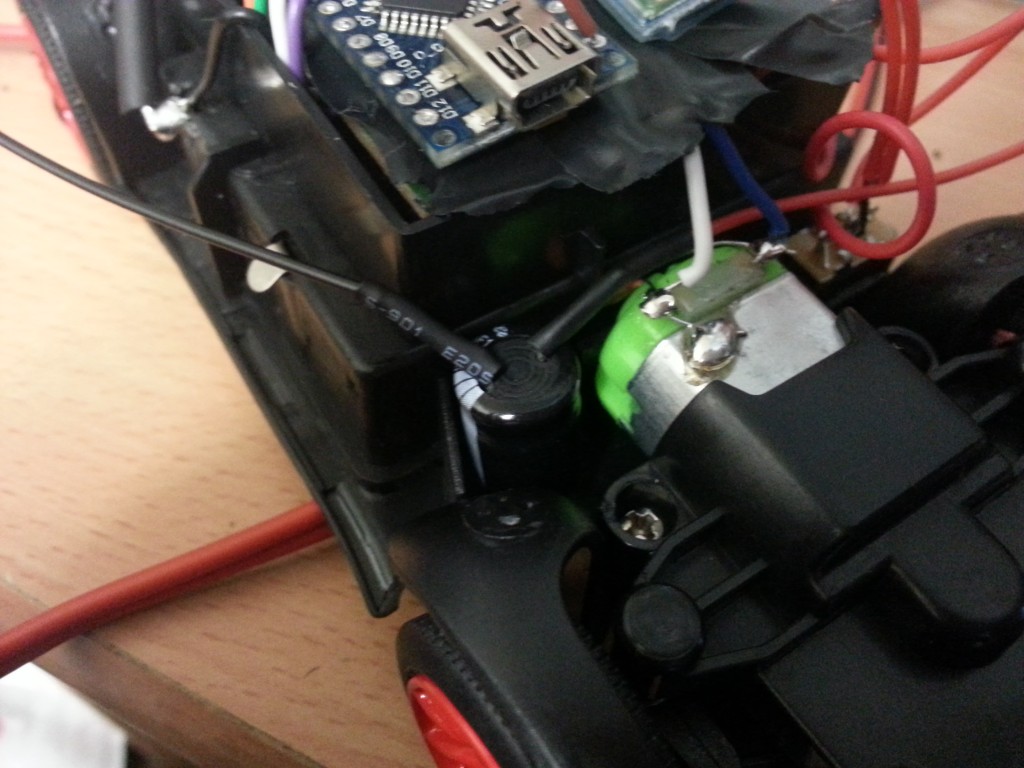 However when trying to move the forwards or backwards i.e. use the main motor the arduino is dropping out for a split second so obviously the voltage is still going that bit too low. Some further investigation is needed into just how low its dropping and what is needed to keep it up. I’ll update with any news.

Here is two pics showing a sneak at the app and the lights on and off. 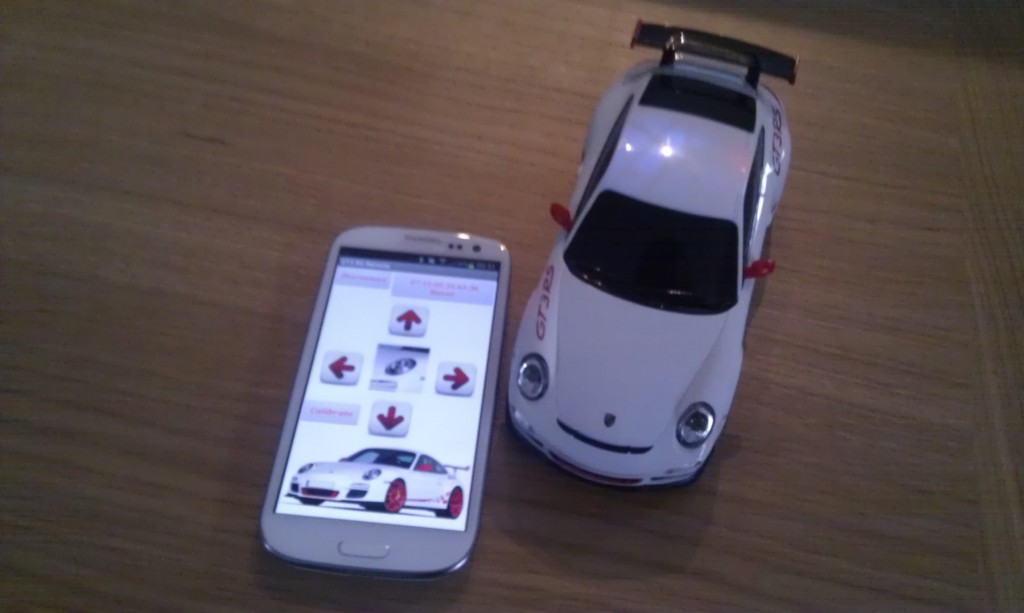 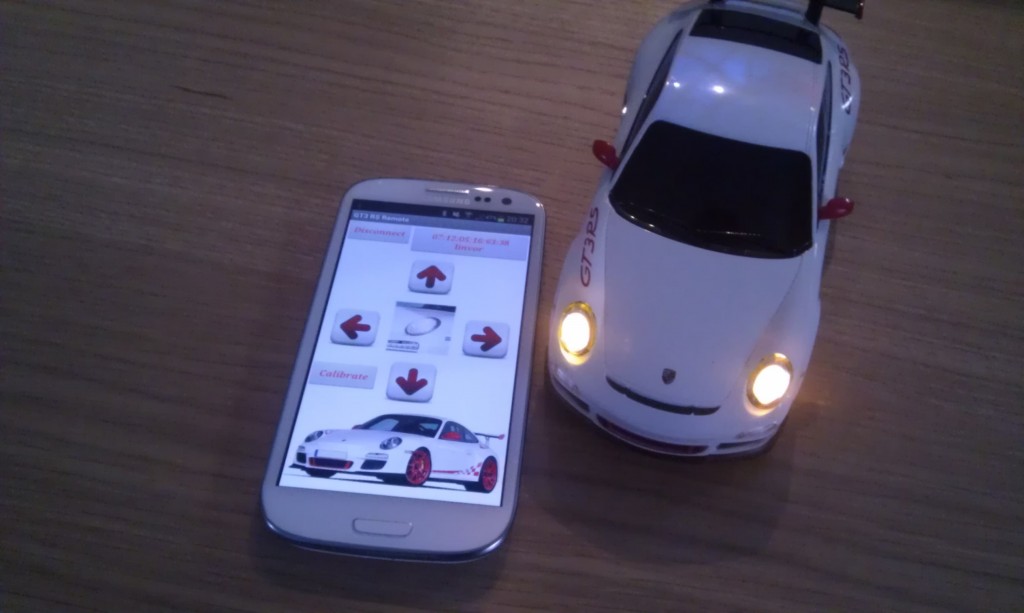